URGENT: We Need Your Help to Provide a Bible for a Service Member or Veteran Today!

Why Is Jesus Called the "Bread of Life"?

Figurative and literary language exists in many places in the Bible. From the poetry in the Psalms to the parables of Jesus, imagery and metaphor are a part of how God speaks to the world in His Word. It communicates heavenly concepts that are difficult to put into words, or is a way for the Holy Spirit to speak to the soul, and provides concrete images to help individuals grasp abstract, metaphysical, ideas.

After feeding 5,000 men plus women and children, Jesus speaks to the crowd again, this time offering them a different kind of bread, one that would never rot, and would always keep them full. When the people ask for this bread, the Bible records, “Jesus said to them, ‘I am the bread of life; whoever comes to me shall not hunger and whoever believes in me shall never thirst’” (John 6:35).

The bread of life is not physical bread, but the bread of spiritual renewal found in the salvation of the blood of Jesus Christ.

Why Does Jesus Say He Is the Bread of Life?

One of the themes in the Book of John is who Jesus is, and not just what He did. The Apostle John opens his account with an explanation of Jesus’ deity. In chapter six, he focuses on one of Lord’s miracles, and its fallout. Because the Lord performed miracles of healing and taught the Scriptures with authority, there would sometimes be throngs following him.

In one of these instances, the Lord takes five loaves of bread and two fish and feeds thousands of people with it, with twelve baskets leftover. That night, He walks on water. The next day, those same thousands gather again to be fed. Jesus then offers them salvation – eternal nourishment – rather than just temporary sustenance.

“Truly, truly, I say to you, you are seeking me, not because you saw signs, but because you ate your fill of the loaves. Do not work for the food that perishes, but for the food that endures to eternal life, which the Son of Man will give to you. For on him God the Father has set his seal... For this is the will of my Father, that everyone who looks on the Son and believes in him should have eternal life, and I will raise him up on the last day” (John 6:26-27, 40).

The Lord presents His miracle as an opening act. In this life, mankind must toil and labor for food that only temporarily nourishes the body, which will eventually die. He had the power and authority to multiply that food, and could do so much more.

If they put their faith in Him, then they would have eternal life. He reminds them about the manna the Father gave their ancestors in the wilderness after leaving Egypt. He then states, “I am the living bread that came down from heaven. If anyone eats of this bread, he will live forever. And the bread that I will give for the life of the world is my flesh” (John 6:51).

The response to this offer for eternal life through the bread of life was not positive. The Bible recounts the people complaining, and even some of His disciples leaving, unable to understand the metaphor, or unwilling to accept Jesus’ explanation of who He is.

What Is the "Bread of Life"?

Bread is one of the essential foods of many cultures all around the world; it is a staple in many diets, and for centuries it would have been one of the most accessible foods for people of all wealth and social status.

At that point in history, especially in Jesus’ culture, bread would have been understood as a nutritional necessity. It also has historical significance for the Jewish people, harkening back to God’s life-sustaining manna, which kept their people alive in the desert. Jesus chose bread as His metaphor intentionally.

Salvation and a relationship with the Lord is not like a sweet treat – not necessary but enjoyable. It is not like meat, which one can survive without but is important to a well-rounded diet in many circumstances.

Salvation is essential to human existence and necessary for eternity. When Jesus says He is the bread of life, He is saying He is essential.

Just as God the Father provided nourishment, He was providing a path to redemption for mankind, separated from Him by sin, through Jesus Christ. The Lord underscores that He is the way to this redemption by foreshadowing the crucifixion. Without the crucifixion and the resurrection, the sins of the world remain unpaid, and mankind remains under the law.

As Paul would go on to explain, “For God has done what the law, weakened by the flesh, could not do. By sending his own Son in the likeness of sinful flesh and for sin, he condemned sin in the flesh, in order that the righteous requirement of the law might be fulfilled in us, who walk not according to the flesh but according to the Spirit” (Romans 8:3-4).

In the context of the events of John 6, Jesus was telling the crowd to follow Him to the crucifixion and resurrection, to believe in the promised redemption. 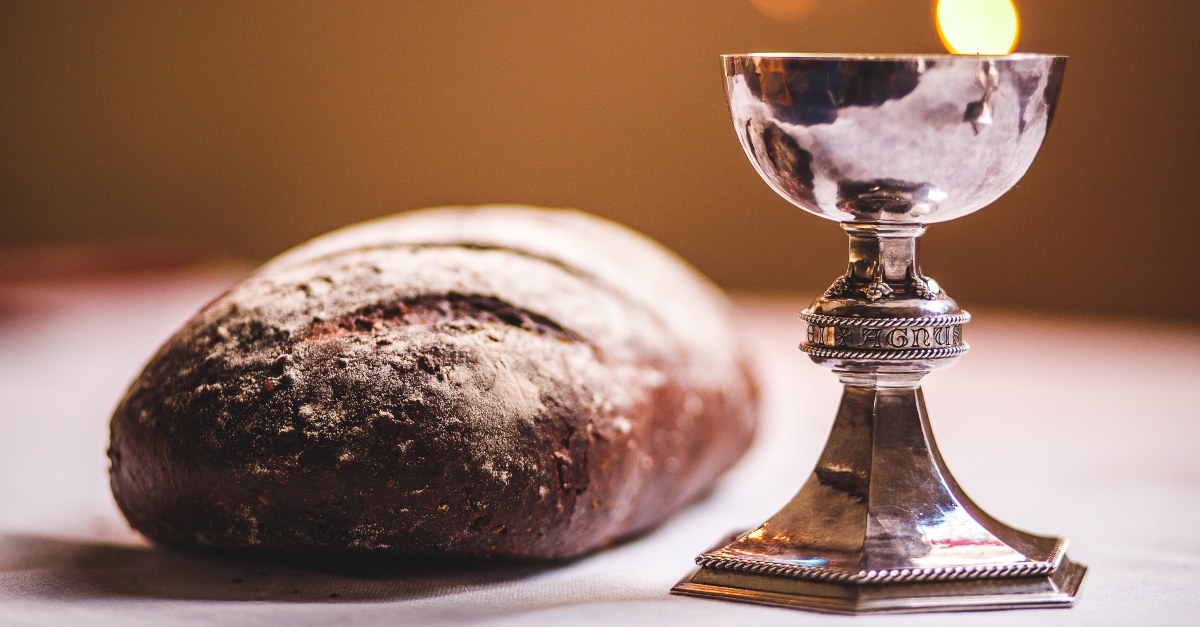 Where Else Does Jesus Talk about Bread?

The relationship between bread and salvation appears in other parts of the Gospel as well. The Book of Matthew recounts Jesus’ temptation in the wilderness after He was baptized by John the Baptist. He fasted for 40 days, and Satan came to Him with three temptations.

The first one tried to target that physical hunger from the fast, challenging the Lord to turn stones to bread in order to satiate His hunger. Jesus resists temptation saying, “It is written, ‘Man shall not live by bread alone, but by every word that comes from the mouth of God’” (Matthew 4:4). As He would say to the crowds, earthly food may solve the temporary state of hunger, but does not solve the eternal problems of sin and spiritual darkness. The Word of God contains the answers to bigger questions.

An extension of this metaphor would extend to sin. There is a difference between leavened and unleavened bread. The first has been made to rise with yeast while the second has not. After an encounter with the Pharisees and Sadducees - political and religious leaders in Hebrew culture - the Lord Jesus warns His disciples, “Watch and beware of the leaven of the Pharisees and the Sadducees” (Matthew 16:6).

Despite having heard Jesus speak of bread in metaphorical terms on previous occasions, the disciples thought He meant literal bread. Jesus corrects them, and they understand the leaven represents the false teachings of both groups.

The culmination of this symbol of bread as the saving nature of Jesus comes at the Last Supper. “Now as they were eating, Jesus took bread, and after blessing it broke it and gave it to the disciples, and said, ‘Take, eat; this is my body’” (Matthew 26:26). Here, the Lord explicitly spells out the nature of His upcoming crucifixion, and His role in restoring people to a right relationship with God for eternity.

The breaking of the Lord’s body and the spilling of His blood on the cross paid man’s debts for their sins, making eternal life in heaven available. The bread consumed at that Passover meal only staved off hunger for a few hours, but the relationship with Jesus Christ will sustain them forever.

Why Is It Important That Jesus Is the Bread of Life?

Jesus identified Himself as the bread of life, the living water, and the way. He did not present Himself a source of salvation, but as the only way to salvation. Without Him, without the bread of life, there is no hope for salvation. By identifying Himself as the source of forgiveness, Jesus makes the path to repentance and a relationship with God, plain, simple, and available for everyone.

There are no additional sacrifices or works, “because if you confess with your mouth that Jesus is Lord and believe in your heart that God raised him from the dead, you will be saved” (Romans 10:9). The bread of life will sustain the believer.

Bethany Verrett is a freelance writer and editor. She maintains a faith and lifestyle blog graceandgrowing.com, where she muses about the Lord, life, culture, and ministry.

Can I Really Trust the Bible?

Nobody Will Remember Me, and That’s a Good Thing

To Be Gospel-Centered, You Need the Holy Spirit