Share Tweet
Jesus dictates letters to the remaining three of the Seven Churches of Asia. This chapter completes the record of “the things which are” (Rev. Rev. 1:19+). The reader is encouraged to “have ears to hear what the Spirit says to the churches”, even down to our own day. the angel
See the discussion concerning the identity of the angel at Revelation 1:20. church in Sardis
See commentary on Seven Churches of Asia. Sardis
Sardis was the ancient capital of Lydia.

Temple of Artemis at Sardis 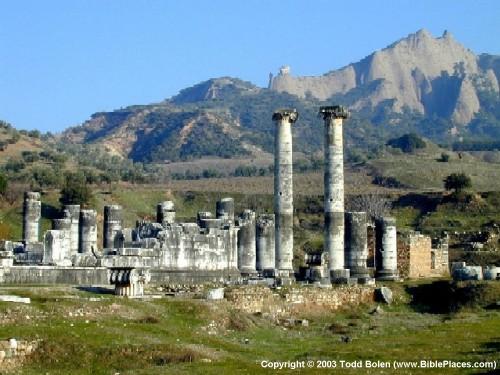 1
Sardis was known for its great wealth and may have been the earliest kingdom (7th century B.C.) to use minted coins.2

In John’s time it was a trade center known for textile manufacture, dyeing, and jewelry. Sardis had been Lydia’s capital and was proverbial for its riches. To this day, our idiom “as rich as Croesus” acknowledges this fact, for Croesus was the king of Sardis who had almost unlimited riches, yet who led the Lydian empire into defeat and decline. Sardis epitomized the complacency, softness and degeneration which invariably ultimately accompany wealth.3

It was also considered a mountain fortress4 which was very difficult to capture, except through the negligence of the defenders:

At the approach of Alexander, . . . the Sardians hastened out to surrender their city without resistance. . . . the place was again captured by Antiochus III in 214 BC through the negligence of the defenders.5

The rock on which Sardis was built is friable, which means that while the slopes were precipitous, because of the cracks and faults, it was climbable. One of Cyrus’ soldiers had noticed a Sardian soldier climbing down this slope to retrieve a helmet he had dropped, and so concluded that the slopes were negotiable in that particular spot. So that night he led a party of Persian troops up to the citadel by following the fault in the rock. When they reached the battlements they found them unguarded, for the Sardians considered themselves too safe to need a guard. The battle of King’s Mountain in American history is similar to the Sardian collapse, for in that battle the rebels scaled a redoubt while the English relaxed in false confidence of their security. Astonishingly, Sardis did not learn from experience, for two centuries later one of Antiochus’ soldiers repeated this feat and again led the capture of an unguarded city which had resisted siege for a year. Twice, the Sardians lost their city because they were too complacent to watch! This historical background underlies Christ’s injunction to watchfulness (Rev. Rev. 3:2-3+), and Rev. Rev. 3:3+ alludes to the means by which the city was lost twice before—a thief in the night.6

A large temple dedicated to the Asiatic goddess Cybele stood at Sardis:

Excavations . . . unearthed . . . an exceptionally large (160 by 300 feet) temple dedicated to Artemis. Its seventy-eight Ionic columns (of which two are still standing) are each fifty-eight feet in height. . . . It was dedicated to a local Asiatic goddess usually referred to as Cybele, who was identified with the Greek Artemis. This patron deity was believed to possess the special power of restoring the dead to life [cf. Rev. Rev. 3:1+].7

Being situated in a mountainous region, the city was earthquake-prone:

Sardis, like neighboring Philadelphia, suffered a catastrophic earthquake in AD 17. . . . this was nothing less than the sudden collapse of a great part of the mountain and the consequent disappearance of much of the very site of the original fortress-city.8

Because of the earthquake, which drove them from the city proper, and because of the fertility of the soil, many of the people had turned to farming as a means of livelihood, specifically to the cultivation of vineyards. Apparently, because of famine, in A.D. 92 Domitian issued an edict that at least half the vineyards in the provinces be cut down and no new ones planted. This action was designed to increase production of corn which the Empire needed badly. This crisis affected Philadelphia more critically than any other, because no city of Asia depended on the fruit of the vine more than it. Dionysius, god of wine, was the principal deity.9

(Some correlate Domitian’s edict with Revelation Rev. 6:6+, although we believe it to be unlikely.) In the second century, Melito was bishop of this city. 10 but Christianity was completely exterminated in the Hermus Valley in the Middle Ages.11 In more recent times, Sardis has none of its previous opulence:

Sardis, the once proud capital of Lydia, and the residence of its opulent monarchs, is now reduced to a wretched Turkish village called Sart, the habitation of herdsmen, buffaloes, and oxen, situated at the foot of mount Tmolus, on the banks of the Pactolus, between 30 and 40 miles east from Smyrna. The ruins of Sardis are peculiarly grand, and lift up their heads, as if to assert their ancient glory; but it now contains not a single Christian family.12

The derivation of the name Sardis is uncertain as is the meaning, having been given as remnant, “[Some] have derived it from the Hebrew, and have assigned it the signification of remnant, or an escaped few.”13 those escaping, [J. Dwight Pentecost, Things to Come: A Study in Biblical Eschatology (Grand Rapids, MI: Zondervan Publishing House, 1958), 152] renovation, [Ibid.] the sun, [Smith, The New Treasury of Scripture Knowledge, Rev. 3:1] red ones, [Ibid.] and prince of joy.18

seven Spirits of God
See commentary on Revelation 1:4. Christ emphasizes to this church that He is the source of the seven Spirits of God (John John 15:26; John 16:7) because of His assessment that they are dead . It is the specialty of the third Person of the Trinity, the Holy Spirit, to bring forth life from that which is a lifeless wilderness (Gen. Gen. 1:2):

Prior to the Day of Pentecost, Jesus explained that it was the Holy Spirit that would be the source of “rivers of living water” which would flow out of the heart of those believing in Him (John John 7:37-39). This life-giving Spirit was poured forth on the Day of Pentecost (Acts Acts 2:33). It was on this day that the body of Christ was first animated by the Spirit of Christ (Rom. Rom. 8:9). As God had first breathed the “breath of life” to animate dust from which he formed man (Gen. Gen. 2:7), so each believer is animated by the Holy Spirit when he comes to spiritual life and is joined to the body of Christ (1Cor. 1Cor. 12:12-13). Christ is here emphasizing the Spirit as the means by which they might strengthen the things which remain, that are ready to die (Rev. Rev. 3:2+).

It need hardly be observed how important a witness this verse, when the right interpretation of “the seven Spirits” has been seized, bears to the faith of the Western Church on that great point upon which it is at issue with the Eastern, in respect, namely, of the procession of the Holy Ghost. he is indeed the Spirit of the Father and the Son.19

I know
See commentary on Revelation 2:2.

have a name that you are alive
Alive is ζῆς [zēs] : “Which needs to be distinguished from the word-group of βίος [bios] (‘life’). The former refers to inner life, the latter to external.”20 Christ emphasizes the wide divergence between how the church of Sardis appears to men and how it appears to God. This underscores a theme which runs throughout Scripture: that those without the Spirit of God are unable to see the world through the eyes of God. The church of Sardis had made for themselves a name. Name is here used to represent fame, reputation, or character. Thus the Sardians were following in the sin of Babel. “And they said, ‘Come, let us build ourselves a city, and a tower whose top is in the heavens; let us make a name for ourselves, lest we be scattered abroad over the face of the whole earth’ ” (Gen. Gen. 11:4).

but you are dead
Jesus says they are dead —in the sense of being disconnected from the Father, just as the prodigal (Luke Luke 15:24, Luke 15:32).

One commentator has said, “Their state is described in a single word—soulless profession-they had a name to live but were dead. It is not scandalous wickedness, but decent death; the form retained, the heart gone; Christ owned in word, ignored in deed; creeds correct, conduct respectable, life departed . . . sound doctrine and outward propriety . . . affections not only waning, but gone. His name held, His Word read, His truth owned, Himself forgotten.” . . . When the human spirit does not control some part of the body, there is said to be a partial paralysis. Some pressure upon a nerve center or some other abnormality may cause one foot to be dragged or one hand to be withered instead of maintaining the normal participation in the life of the body. The Holy Spirit should govern and direct the Church which is the Body of Christ.21

The activity of a fellowship can often be mistaken as an indication of life. But Scripture makes plain that works and activity in and of themselves are no reliable indicator of spiritual life for it is possible for an active fellowship to be comprised of the “living dead” (Mtt. Mat. 8:22; Luke Luke 9:60; 1Ti. 1Ti. 5:6). “Go throughout Christendom . . . and you will often find the Gospel in a coffin.”22 “The letter does not speak of persecution (why would Satan bother to persecute a dead church?).”23

It is vain to boast of a correct creed, of right theories, of sound doctrine, if there be no practical godliness, no good works, no positive virtues and active charities and labours. Orthodoxy is important, but orthodoxy alone will not do. The most orthodox in this list is depicted as the deadest. . . . There are, indeed, such things as “dead works;” works that have no life-connection with piety; works put on from without, and not brought forth from within; fruits tied upon the tree, and not the product of its life; which are not at all characteristics of true religion. There may be prayers, vigils, fasts, temples, altars, priests, rites, ceremonies, worship, and still be no true piety. Heathenism has all these.24

1 Copyright © 2003 www.BiblePlaces.com. This image appears by special permission and may not be duplicated for use in derivative works.

4 “Even at dates later than the Revelation ‘to capture the acropolis of Sardis’ was proverbially ‘to do the impossible’.”—Colin J. Hemer, The Letters to the Seven Churches of Asia in Their Local Setting (Grand Rapids, MI: William B. Eerdmans Publishing Company, 1989), 133.

6 Mills, Revelations: An Exegetical Study of the Revelation to John, Rev. 3:1.

8 Hemer, The Letters to the Seven Churches of Asia in Their Local Setting, 134.

10 “Melito, a name we hear seldom now, but the titles of whose works inspire us with a deep regret for their almost entire loss, was bishop of Sardis, being the only illustrious name connected with this Church, in the latter half of the second century (Neander, Kirch. Gesch. i. 3, p. 1140).”—Richard Chenevix Trench, Commentary on the Epistles to the Seven Churches in Asia (Eugene, OR: Wipf and Stock Publishers, 1861), 152.

19 Trench, Commentary on the Epistles to the Seven Churches in Asia, 153.

24 Seiss, The Apocalypse: Lectures on the Book of Revelation, 73.

5 Counterfeit Truths of Progressive Christianity Alisa Childers
6 Simple Ways to Count Joy When Life Is Difficult Micah Maddox
20 Great Bible Verses for Kids to Memorize Jessica Udall
16 Reflective Holy Week Prayers to Remind Us of the Beauty of the Cross Lori Stanley Roeleveld
It’s True: Where Your Treasure Is, There Your Heart Will Be Also Bethany Verrett
Why Is Prayer Important for Christians? Melissa Henderson