Share Tweet
seven angels
These are seven specific angels who are said to stand before God. Some have identified these with angels which are named in the books of Enoch and Tobit.1 But God has only chosen within the pages of inspired Scripture to reveal the names of three powerful angels: Lucifer (Isa. Isa. 14:12), Gabriel (Dan. Dan. 8:16; Dan. 9:21; Luke Luke 1:19), and Michael (Dan. Dan. 10:13; Dan. 12:1; Jude Jude 1:9; Rev. Rev. 12:7+). It is pure speculation to attempt to identify these specific angels other than recognizing that Scripture reveals that Gabriel “stands in the presence of God” (Luke Luke 1:19).

The Seven Angels with Trumpets 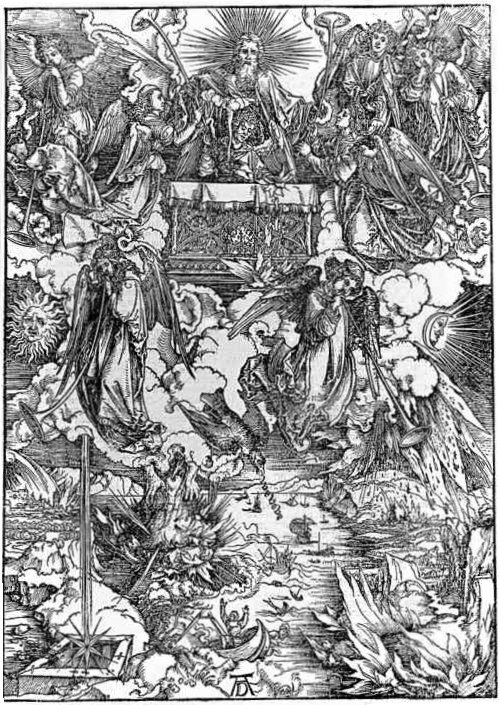 They are of particular rank and distinction, for not all angels are of the same dignity and office. Paul enumerates “dominions, principalities, and powers” [Col. Col. 1:16] among the celestial orders. Daniel speaks of some chief princes [Dan. Dan. 10:13], Paul and Jude refer to archangels [1Th. 1Th. 4:16; Jude Jude 1:9]. Angelic beings are not, therefore, of one and the same grade. The sons of God, in general, come before him only at appointed times (Job Job 1:6) but the Saviour speaks of some angels who “do always behold the face of the Father which is in heaven” (Mtt. Mat. 18:10).3

Some believe these angels are the seven spirits before God’s throne (Rev. Rev. 1:4+; Rev. 3:1+; Rev. 4:5+; Rev. 5:6+).4 But there is strong evidence for understanding the Seven Spirits as the various manifestations of the Holy Spirit rather than angels. See commentary on Revelation 1:4.

who stand before God
When Gabriel visited Zecharias to announce the birth of John the Baptist, he said “I am Gabriel, who stands in the presence of God” (Luke Luke 1:19). Apparently there is a group of especially powerful angels, of which Gabriel is a member, who have close access to God and stand before Him. Here we meet with another piece of evidence which argues that the twenty-four elders are not angels for they sit before God. See commentary on Revelation 4:4.

These seven angelic trumpeters are elect and loyal servants of God with a position commensurate with their trust. They stand, permanently, in the presence of God Almighty; these are special angels, they are of Heaven’s elite (Rev. Rev. 8:2+)! In eastern courts the most favored courtiers had the right to enter the king’s presence at all times; these angels are angels of the presence; their high rank is thus confirmed.5

to them were given seven trumpets
The trumpets were given to the angels by divine permission. The judgments which come forth once they are blown are initiated by God. See commentary on Revelation 6:2. These are the next set of seven judgments in the series of seals, trumpets, and bowls. As the judgments progress, they escalate in intensity. The trumpet judgments are more severe than the preceding seal judgments, but less severe than the bowl judgments to follow. For example, at the second trumpet, a third of the seas become blood (Rev. Rev. 8:8+). At the second bowl judgment, the remaining two-thirds of the seas become blood as of a dead man (Rev. Rev. 16:3+). At the sounding of the seventh trumpet, whose effects include the bowl judgments which follow, the announcement is made: “The kingdom of the world has become the kingdom of our Lord and of his Christ, and he will reign for ever and ever.” (Rev. Rev. 11:15+). See Literary Structure. Zephaniah associated trumpets sounding an alarm with the Day of the Lord (Zep. Zep. 1:14-18). The seven trumpets, which ultimately lead to the fall of the great city Babylon (Rev. Rev. 18:1+), are typified by the seven ram’s horns used to overthrow Jericho in the days of Joshua (Jos. Jos. 6:4-5). “It should be carefully noted, that the order of these first four trumpet-judgments is the same as that of the bowls of wrath in chapter 16. (1) Earth; (2) Sea; (3) Rivers and fountains of waters; (4) The Sun.”6 The trumpet judgments are divided into two groups: the first four which affect the natural systems (Rev. Rev. 8:7-12+) and the last three which affect men (Rev. Rev. 9:1+, Rev. 9:13+; Rev. 11:15+).

In contradistinction to the last three trumpets, the first four afflict natural objects, i.e., earth, trees, grass, rivers, and the like. The fifth and sixth have men as their special objects, and unlike the first four which are connected and interdependent, are separate and independent. In contrast to these two, the first four have only an indirect effect on mankind. Besides these differences, the voice of the eagle in Rev. Rev. 8:13+ separates the trumpets into two groups (Alford, Swete, Beckwith, Sweet).7

4 Signs It Is Time to Leave a Church Michael Jakes
10 Beautiful Verses to Remind You That God Is with Us Lucas Hagen
5 Biblical Truths from the Song "Mary Did You Know?" Kristi Walker
Why It Is So Important to Remember Easter on Christmas Clarence L. Haynes Jr.
What Does It Mean to Be Redeemed? Dave Jenkins
7 Reasons Why it Was Necessary That Jesus Became Flesh Clarence L. Haynes Jr.